Behind the veil – In Flames stupendous on I, Mask

THE evolution of modern music has been weird – vocal warbling on pop songs, dance DJs pretending to mix as tracks from their computer, and some metal bands stuck in a rut. But when it comes to In Flames they have evolved, without betraying their past. Now they have gone one step further.

New release ‘I, Mask’ is complex, yet straight forward; layered, yet easy to ‘get’; and, introspective and outward-looking.

Their last release, in 2016, ‘Battles’ (reviewed here) was a soul-searching examination of so much, and while magnificent some thought they had strayed a little too far from their roots. They were wrong, but hey ho, we fast forward to 2019 and I, Mask… 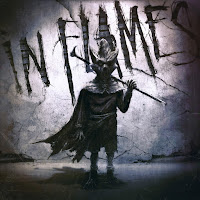 This is a statement release. It is an album that challenges and has heft and beauty in equal measure. For every riff battering you into submission, then entrances with melody and clean vocals.

The opener ‘Voices’ sets the tone for the release, yet is just the tease of the greatness within.

And, the title track rages and tears from the off as Anders Fridén roars before adding the melody chorus. Whatever has been the instigation of I, Mask in toto, new writing processes or a change in attitude it matters not: this is a band reclaiming melodic metal for itself.

The playing is exquisite in places – each riff and solo measured. Björn Gelotte and Niclas Engelin taking the sections of each song and deploying their guitars in a way that compliments the overall song.

‘I Am Above’ broods and threatens and realises personal strength and fragility in its lyrics. While ‘Battles’ felt like an exposition of personal issues I, Mask deals with much more.

As well as dealing with the personal it is a call to avoid falling down the social media rabbit hole, avoid isolation – and the wondrous ‘Follow Me’ is a choker when you listen to it properly.

Equally the strident ‘(This Is Our) House’ is a call to arms to save the planet, propelled by anger and a battle cry to unite to save Earth. While it has it’s climate change theme it is could also contain a lyric that sums up In Flames own trajectory: “We Won’t Back Down“.

Indeed that is something that In Flames encapsulate; in their 30-year career they have stood on their own terms as fads come and go, while examining what they do, how they do it and adapting to what they want.

While ‘Burn’ roars off the blocks and ‘Deep Inside’ eases in with almost middle-Eastern tones, they showcase a band that is prepared to risk their considerable reputation by doing what they want. And, that surely is the key to any band’s integrity – and success be true unto thyself.

Closer ‘Stay With Me’ almost has the feel of power balladery without becoming a cliché: tenderness and self-abasement and hope – exquisite.

I, Mask is a defining moment for this generation. Man of the acts professing to be ‘modern metal’ need to sit down listen to this, and learn.

In Flames’ reputation was already intact, but now with I, Mask they can genuinely stand peerless.

I, Mask is available now on Nuclear Blast