POWER metal. It gets a bad name from the snobs, and in some case it is deserved. But, when it is done well it is something that earns a grin and ham fisted air guitar playing. And, Bloodboiund do it very well.

Eight albums in and they are still doing it very, very well. Rise Of The Dragon Empire has all the power elements you would expect, with the smattering of Nordic folk. And, damn it but it makes us smile (when we’re not pulling poses and pointing skyward to Valhalla…)

Led with the increasingly impressive vocals of Patrick J Selleby and the gang singalongs it is lyrically slightly sub George RR Martin, but that is part of the charm. Sure, we revel in bands that explore the deepest recesses of the human mind, and the collapse of society, but this is glorious escapism.

All that would be futile without 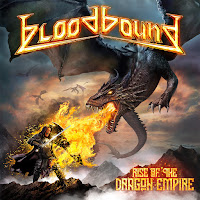 t stout musicianship and well thought arrangements, such as on ‘Magic Eye’, with its pacey development.

Tomas and Henrik Olsson wield their guitars in a glorious symmetry and Fredrik Bergh’s keyboard flourishes are sumptuous. The intro to ‘Blackwater Bay’ is worth the price of admission.

However, that same song could be identified by the naysayers as an example of the overblown, nature of the genre Bloodbound tread. But that is to miss the point. As the guitar solo kicks in just before the three minute mark you realise that this is a band confident in what they are doing, and know full well that it could be seen as ridiculous, but is really glorious.

Take lead single ‘The Warlock’s Trail’ – driven by Andres Broman’s bass and the metronomic pace of Daniel Sjogren’s drums to underscore the soaring heights of the track.

Sod it, doubters can go away, because Rise Of The Dragon Empire is just enjoyable, entertaining and wonderful.

(Oh, and we admit at least one of the cut-offs is adorned by a Bloodbound patch following their Belfast show with Sabaton.)

Rise Of The Dragon Empire is out now

Sylosis stunning return on the masterpiece Cycle of Suffering