This is the first time I’ve written a review of a Call of Duty game where I didn’t have to either avoid spoilers or put in spoiler warnings. After all, this year Black Ops 4 ships with multiplayer, the Blackout battle royale mode, and Zombies. There is no single-player campaign.

A part of me wasn’t certain how to even review this game now that the solo campaign is gone. Does one dock points because a staple of the series is no longer present? Or does one review the game based on what’s included rather than what isn’t?

I think it depends on quite a lot, honestly. If the campaign’s absence made the rest of the experience feel incomplete, I think it should probably affect the final score. But Black Ops 4 is hardly short on content, and what we have in multiplayer and Blackout is all excellent.

No, the missing single-player campaign does not ruin the game, not by a long shot.

Most Call of Duty gamers don’t finish the campaign anyways. Most gamers don’t finish the campaigns of any single-player games. But I play every single Call of Duty campaign start-to-finish. It’s a guilty pleasure and a rarity in today’s market: A blessedly short, AAA game, that you can finish in just a couple of sittings. (Meanwhile, I find I rarely get into Zombies mode, so this review will focus entirely on multiplayer and Blackout.)

Sure, Call of Duty campaigns rarely rise to true greatness, too rooted in bombast and linearity, but the campaign also helps ground the game’s multiplayer, giving it a fiction to anchor the rest of the game to. In Black Ops 4, there’s none of that beyond some tutorial missions with some (actually quite good) cut-scenes that, in a small way, help lend the specialists in MP some personality and backstory. But it’s not enough to justify buying the game if you mostly play for the campaign. 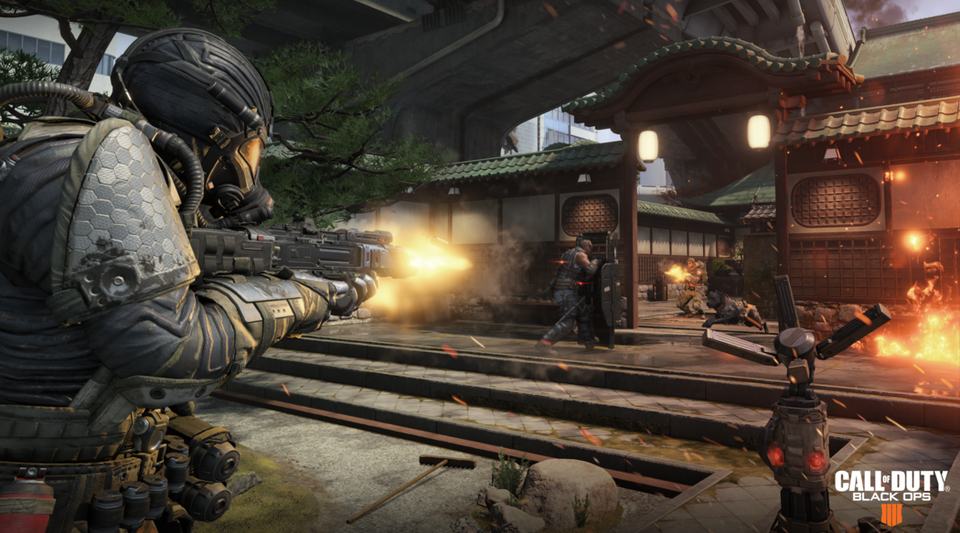 All that aside—and why gnash our teeth over what the game isn’t when we could talk instead about what it is?—Black Ops 4 is a fantastic shooter that’s loads of fun. As a long-time player of this franchise, I can say that it’s the best Treyarch multiplayer since Black Ops 2. Black Ops 3 had perfectly fine MP, but the double-jumping and wall-running never sat right with me, and the hero shooter elements never felt fully balanced. Now that Treyarch has dialed back movement systems and (mostly) balanced out the specialists, the game just plays and feels better all around.

Every specialist has a valuable set of powers to lend to the match, whether you want to play a support role, a more defensive role or go on the offensive. The “boots-on-the-ground” gameplay may be less vertical than Black Ops 3, but it still feels faster and more insane. Matches are incredibly fast-paced and frenetic, and god help you if you’re new to the series.

Even if you cut your teeth on last year’s WWII, you’ll find the speed in Black Ops 4 daunting. Both games are “boots-on-the-ground” but this year’s is much faster and more chaotic. That’s not a criticism. Once you fall into a rhythm it’s enormous fun. It’s quite possibly the most fun I’ve had with this series in multiplayer since . . . well probably since Black Ops 2 or the first couple of Modern Warfare games.

But in some ways, this may be the pinnacle of what Call of Duty has to offer; in some ways it’s the best multiplayer Call of Duty has ever been. In other ways it’s frustrating, with terrible spawns that leave you exposed the instant you’re back in the match. Like many entries in this franchise, some of this will get ironed out in future updates. The good news is that the core gameplay loop is strong.

Granted, there have been some launch problems. The game, which ran at a tick-rate of 60 hz during the beta, had its servers downgraded to one third that rate at launch. That problem, and many others, was ultimately fixed. But as with any massive online game, there are going to be hiccups. Treyarch’s ability to solve these and speak openly about problems with the community gives me faith in this game’s ability to endure post-launch.

For the most part, I find multiplayer to be engrossing, challenging and more tactical than past entries in the series. 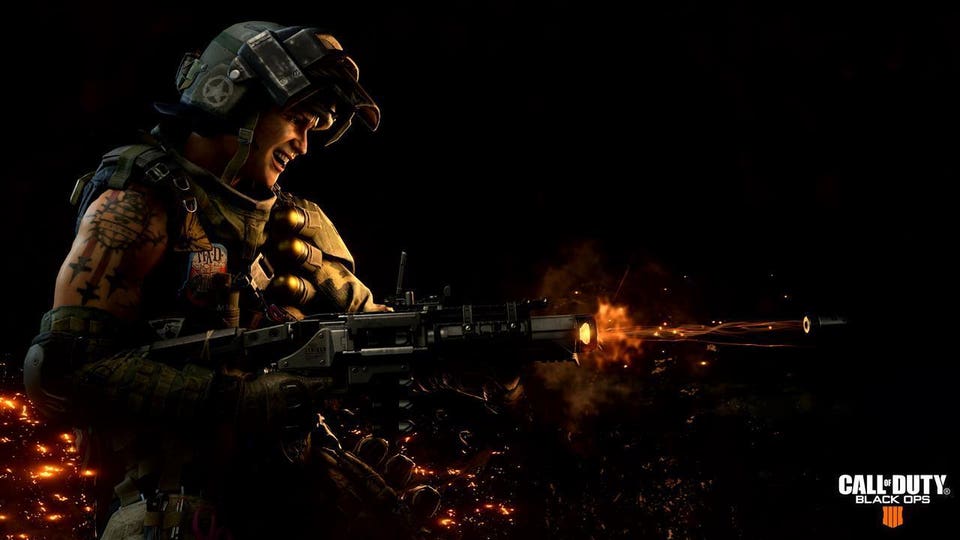 If this all sounds a bit like Overwatch and its cadre of heroes and their special abilities, well, that’s because it is—a little. Each specialist in Black Ops 4 is still mostly the same as any other, however. They look different and sound different, but they all run the same speed and have the same amount of life. You still need to pick a class which are just basic loadouts that you can customize. Yes, these special abilities and supers add a new layer of gameplay to the mix, but by and large this is still a twitch shooter that’s all about reflexes and aim.

Meanwhile, the game shipped with 14 maps, most of which are not only visually pleasing but well-balanced and fun to play in, and Nuketown is shipping in November as a free update for everyone. 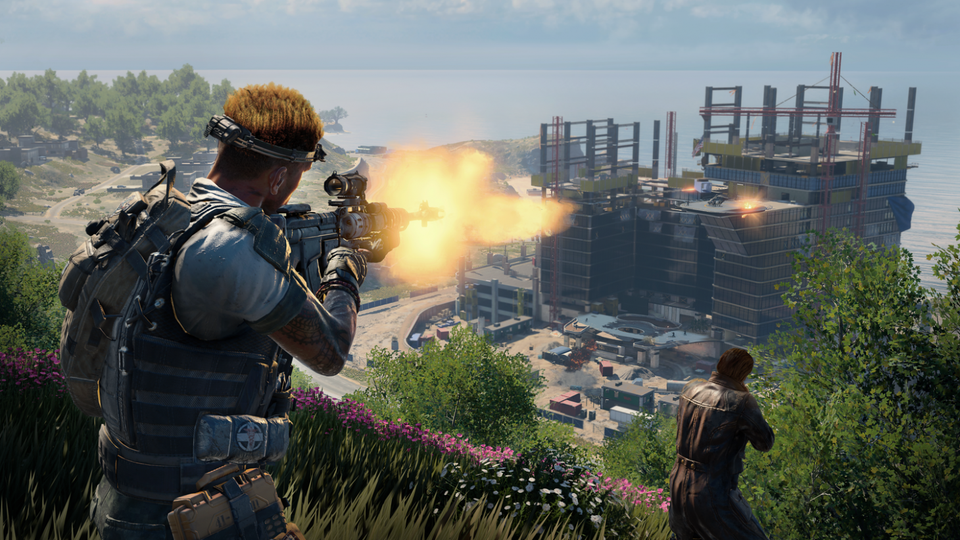 Blackout is the new battle royale mode that Treyarch bundled with Black Ops 4 instead of a campaign. You can play Solos, Duos or Quads (Squads but without the “S”). 100 players descend onto the giant map and try to outlive their opponents. Last player/Duo/Quad standing wins the match.

We’ve seen battle royale grow into a real phenomenon over the past couple of years, first with PUBG and then Fortnite. Blackout is more akin to the former than the latter, though I vastly prefer Call of Duty’s gunplay to PUBG. Still, it’s a modern military style shooter just like that game, and bears virtually no resemblance to Fortnite.

It’s a lot of fun, too, and gives you the opportunity to ride around in vehicles, including boats and helicopters, and is somewhat less intense than traditional multiplayer. Going from the hectic chaos of multiplayer to the calmer, slower-paced Blackout can be a nice way to catch your breath, though things can get pretty intense in Blackout as well.

I love the huge map with all the familiar-yet-new areas. The map ranges from a giant hydro-dam to a construction site to a docked cargo ship, to the winding rivers and roads of Rivertown. Some areas have zombies, like the asylum, that rush you and distract you from your opponents.

I do think some things could be improved in this mode. It’s a bit of a slog having to die and then go back out into the menu and then reload into the loading zone and then deploy. A quick rematch option would be helpful here. There’s also very little in the way of progression which feels like both a missed opportunity for Treyarch and Activision and a weird omission in terms of providing players with more reasons to keep playing.

I would also like to see more varied modes, so hopefully Treyarch gives us plenty of variety, new additions to the map and so forth going forward. I have faith that they will.

The Contraband System and cash shop 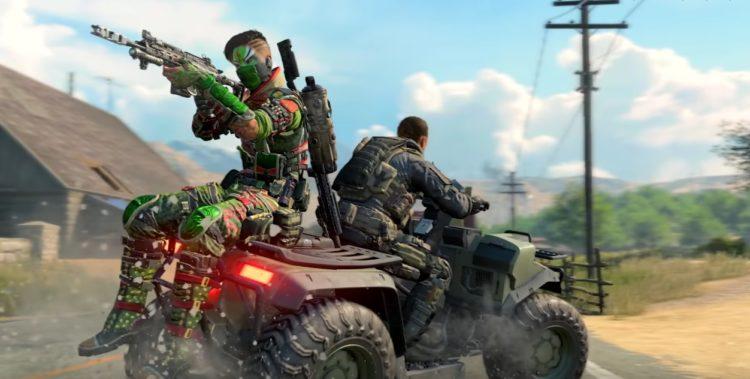 Instead of buying loot boxes, Treyarch has implemented the Black Market’s Contraband Stream. It’s similar to Fortnite’s Battle Pass, but comes at no extra cost. Simply playing the game will get you new cosmetics.

This is a good idea in theory, but it’s been horribly implemented. It appears that all unlocks are based solely on time played rather than XP earned, in-game score, or challenges. Treyarch desperately needs to fix this system, as it not only rewards AFK players, it just isn’t very gratifying at all. And it should be.

There will also be a cash shop at some point where you can spend real money to buy Call of Duty points and spend those points on cosmetics. It appears these will all be items that refresh weekly, though it’s possible an RNG loot-box system could also be included. We won’t know for sure exactly how the cash shop will work until it’s released, but I’m crossing my fingers that it will be 100% items you can see rather than tucked away in crates.

Finally we have the Black Ops Pass, which is essentially just another Call of Duty season pass. It gets you some new Blackout characters, some Call of Duty points, 12 new maps (instead of 16, which is too bad) and more Zombies content.

I maintain that Activision needs to adapt and come up with a better monetization strategy here, as selling map packs only weakens the game and its community over time. But really, this is par for the course when it comes to Call of Duty. 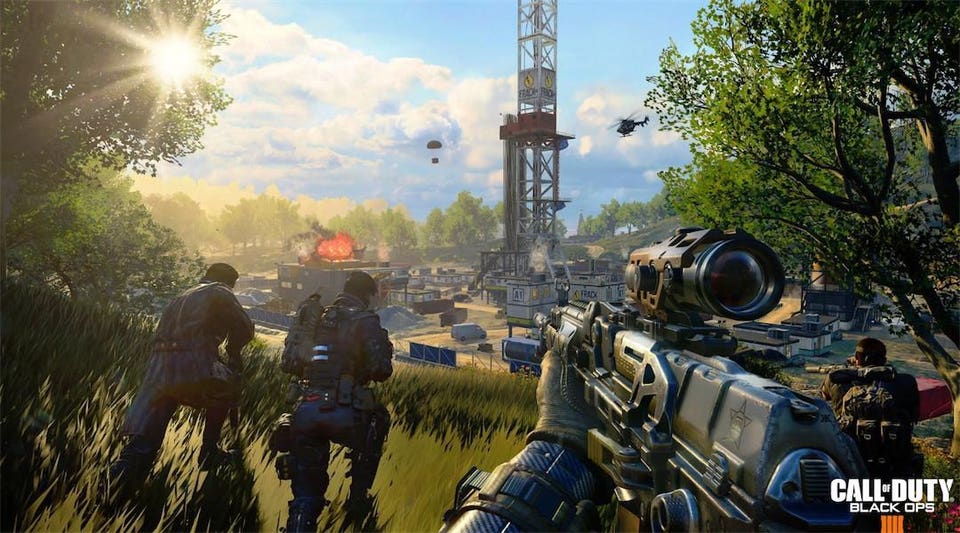 All told, I’m very happy with Black Ops 4 and with Treyarch’s commitment to making it the best game it can be over the long haul. I hope we see continued support for all these modes and fixes to things like the Contraband Stream.

Other things, like the excellent Mercenary playlist (which pits solo players against one another so you never have to play against five-player teams) make the game more accessible and fun for solo players like me.

Finally, I played the game on both PS4 (purchased a copy) and PC (a copy was provided for review) and while both versions are great, the PC version suffers yet again from rampant cheating. It is very frustrating to have entire matches ruined by aimbots. This applies to Blackout as well. It’s a shame this is still such a problem as I really was hoping Battle.net (the new PC home for this series) would be superior to Steam in this regard.

Hopefully this is another issue that will be dealt with going forward.

If you’re only here for the campaign, there’s no reason for you to buy Black Ops 4. But if you’re a multiplayer gamer and enjoy battle royale games, there’s plenty of great, addictive content to keep you playing for months on end. I give the game a Buy on my Buy/Hold/Sell scale. It’s definitely worth your time if you’re a shooter fan.