Declaration from Overkill on Wings of War

What have we been doing with our lives when Overkill have been battling more than most: line-up changes, Bobby ‘Blitz’ Ellsworth’s nose cancer and latterly pneumonia, added to his occasional controversial comments about the Democrats.

They have shown remarkable resilience, however, it is the quality of their albums that has always kept them held in high esteem. Their last release ‘The Grinding Wheel’ (reviewed here) was a statement of class, but #19 ‘Wings of War’ raises the bar. 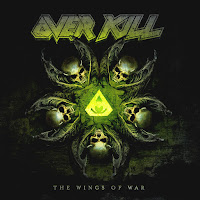 The 10 tracks show balance, precision, allied with humour and a knowing nod to their musical (and on one track literal) roots.

It may clock in at just over 50 minutes but there is not one second wasted. From ‘Last Man Standing’s militaristic opening beats to the closing notes of ‘Hole In My Soul’ this is a thrash masterclass. True, they are not re-inventing the genre or doing anything really challenging, but by all the Metal Gods they don’t need to when these tracks are so good.

Bobby and bassist DD Verni may be the ‘originals’ but Dave Linsk and Derek Tailer combined guitar grunt have elevated every recent released, and the addition of Jason Bittner (ex of Shadows Fall and Flotsam and Jetsam) has given this album a new dynamic vibe.

For fuck sake, if you can keep still ‘Bat Shit Crazy’ you are dead from the neck up: add in the changes in tempo and guitar work on this it is madness to deny how good it is.

Now, as some of you know Overkill take pride in having influences that include punk. And, they take pride in their New Jersey home. Thus, step back, mosh and laugh to ‘Welcome To The Garden State’ – savagery and hilarity in one neat 4:42 package.

Mid-paced tracks such as ‘Distortion’ have the broody feel of the first and second generation thrash, without diluting Overkill’s own take on it; while ‘Where Few Dare To Walk’ drips with menace.

Wings Of War can be summed up in many ways, but best to check out ‘Believe In The Fight’ and ‘Hole In My Soul’. Both songs encapsulate a fuck you attitude; a single finger in the air and a relentless commitment to give everything.

And, given that the album was recorded across three studios it is a cohesive and…well brilliant.

Wings of War is declaration that no matter the age, when an album is this good it is best to set the volume to max and shake the neighbourhood.

Overkill’s Wings of War is out now on Nuclear Blast

Conjuring Fate conjure up excellence on Curse Of The Fallen